More females were on offer compared to the previous year at the Welsh Beltex Club’s sale at Welshpool Livestock Market on Monday, 6 December, where a shearling ewe from Rhys Francis’ Crew flock led the entry at 720gns. 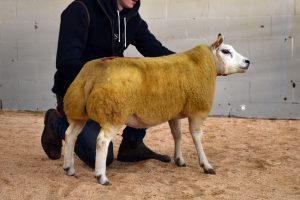 Hitting the high note was Crew Freya ET, a daughter of Kingledores Rascal bred from an imported Van’t Hoveke ewe from the flock at Abergorlech, Carmarthen. Scanned with a pair to Tercrosset Flash, an 1800gns purchase at the Carlisle Premier Sale in August, she sold to A Tortoriello, Llanbister, Llandrindod Wells.

Sion Jones, Pennant, Llanon, Aberystwyth, welcomed a good trade with gimmers at 680gns, 660gns and 650gns, all of which offered different breeding. At 680gns was the second prize winner from the pre-sale show, Fronarth Facetime, a daughter of the 7000gns Clary Dumfriesas. Bred from the Pantgwyn Wil-sired Fronarth Charisma, she sold to Messrs Jones, Cerrigudrudion, Corwen, carrying a pair to Kingledores Forrester.

At 660gns and this time scanned with twins to Clary Dumfries, was the third prize gimmer, Fronarth Fairplay ET. Sired by Muirton Buchan Loon and out of Quarrymount Penney, herself a Quarrymount Nemesis daughter, she was knocked down to DM Rowlands, Cwm Hafodore, Dolgellau.

Selling to Carmarthen’s G Morgan, Llanfynydd, for 650gns was Fronarth Fiesta, which again sold carrying twins to Kingledores Forrester. Her pedigree features a Matt’s ram on to Fronarth Daisy, herself by Muirton Buchan Loon.

The very first of the shearling ewes on offer, Dafydd Owen’s Smart Ass Force of Nature, realised 620gns when also snapped up by G Morgan. Sired by Clary Dumfries and out of the Dooley Siren-bred Smart Ass Trouble, she scanned with twins to Langlands Epic.

Mr Owen, from Rowen, Conwy, also sold the dearest of the aged ewes when his Smart Ass Estee Lauder sold to I Jones, Maesybont, Llanelli, for 550gns. This time scanned with a single to Ardbrack Gwion, she is out of Aviemore Cara 3, an Airyolland Wee Jimmy daughter, while her sire is Chulsey Gate Chris Brown.

Trystan Davies’ Reserve Champion from the pre-sale show also realised 620gns, this time selling to Robert Lewis of the Elan Valley flock near Rhayader. Sired by Dooley Cockey and out of the Hackney Warrior daughter, Rattray’s Cariad, from the flock at Sarn, Newtown, she changed hands in lamb to Broughton Ale.

Hitting 600gns and 580gns were two from Gwion Morgan’s Wern flock from Ffordd Corwen, Rhuthun, both of which were sired by Ardstewart Darth Vadar and sold in lamb to the 7000gns Wannop’s Fie Fi Fo Fum. Dearest at 600gns was Wern Felfed which is bred from Wern Doughnut and also sold to Mr Rowlands, Cwm Hafodore.

At 580gns when also knocked down to A Tortoriello was Wern Frenhines which this time is out of the Tercrosset Wearwolf-sired Wern Betsan.