Beltex males and females met a buoyant trade at the Beltex Sheep Society’s sale at McCartneys Worcester centre on Friday, 3 September, where an increased demand from commercial producers results in an improved average and clearance rate for shearling rams, leaving many vendors pleased with their trade. 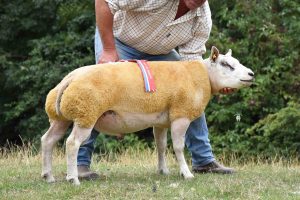 Leading the way when knocked down for 1800gns was Stewart Taylor’s Champion from the pre-sale show, a shearling ram named Staddlestone Funny Bone. He is full of home breeding in the flock at Binley Woods, Coventry, being by the Todhall Sumo-sired Staddlestone Ethan, and out of Staddlestone Desire, a Staddlestone Cracker daughter. Funny Bone caught the eye of Robin and Mandy Kellet and heads to work in their Parkhill flock near Castle Ashby, Northampton.

Staddlestone Ethan breeding proved popular as another, this time named Staddlestone Fury, sold to the Lockyer family for their Look About flock near East Huntspill, Highbridge, for 860gns. His dam is Tercrosset Wanted, an Airyolland Nailer daughter. 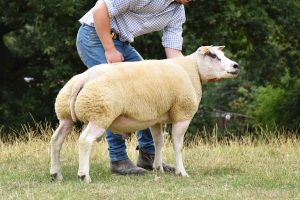 Second in the trade stakes at 1000gns was Angus Mutch’s second prize winner, Heath Holm Fair and Square ET, which is by the 2019 Great Yorkshire champion, Buckles Dark Intentions, that the family purchased for 11,000gns. Selling to Ryan Williams, Little Hereford, Ludlow, this lad is out of the Double O Seven-sired Woodies Bugs Bunny.

The Mutch family, from New Yatt, Witney, also received 820gns for another Dark Intentions son, Heath Holm Fired Up which this time is out of the Fingle Aftershock-sired Charndon Columbine. He sold to P Batchelor, Barnhurst Lane, Princethorpe.

Aled Groucott from Hafodyrynys, Crumlin, saw his Swffryd FCUK sell to the Jones family for their Merton Hall flock near Smithy Fen, Cottenham, for 900gns. With a strong pedigree being out of Swffryd Dimple, a Topflite Al Pacino x Hackney Treacle daughter, his sire is Lakeview Doozer. 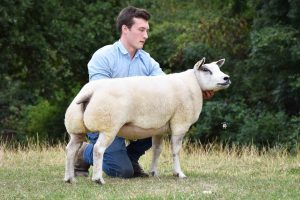 From the same pen, Hackney Facebook ET sold to Dermot Weaver for the Georgie flock, Eight Oaks, Castlemorton, for 640gns. Sired by another import, Scooby Doo, she is out of Hackney Charity, a daughter of Topflite Al Pacino. 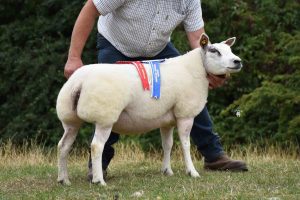 Selling for 600gns was the Reserve Supreme from Charlotte Lockyer, Look About Florence, which also sold to the Jones family, Merton Hall. Her pedigree features Munch Cash Back onto Look About Daisy, a Talewater Bradley daughter.