A shearling ewe from Paul Tippetts led the trade at the Beltex Sheep Society’s sale at Worcester on Friday, 4 September, when she was knocked down for the top price of 1800gns.

Hackney Elsie ET, from the flock near Shifnal, Shropshire, is by the Kingledores Braveheart ram bought for 7000gns at Carlisle which has bred well in the flock while her dam is Hackney Charity, a daughter of the 60,000gns Topflite Al Pacino. She caught the eye of Angus Hamplett and joins his Booden flock near Haughton, Stafford. 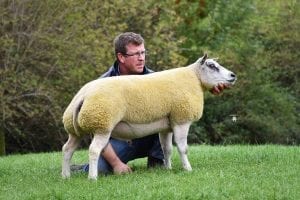 David Thornley welcomed the highest price among the males when his substitute entry, a shearling ram named Dooley Ecstatic, sold to Liam Morgan for his Ty Gwyn flock near Pontarddulais, Swansea, for 1600gns.

The Dooley flock from Swadlincote also received 640gns from T and K Coney, Lampeter Velfrey, Narberth, for the very next lot, Dooley Egor ET. He is full of Belgian breeding being by the imported ram known as Scooby Doo and out of an imported ewe. 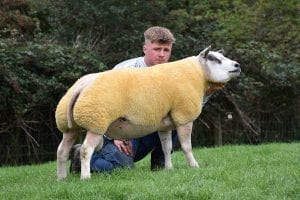 The previous lot, Heath Holm Easter Eel, sold to T Badger, Hanley Swan, Worcester, for that 790gns. His pedigree features Heath Holm Destroyer on to Artnagullion Cymba, a daughter of The Bare Boy.

At 750gns was Wilodge Eagle Eyes from Paul Tippetts which sold to WL Jerman, Whitney-on-Wye, Hereford. A son of the 65,000gns Airyolland Castro out of Kingledores Brienne of Tarth. 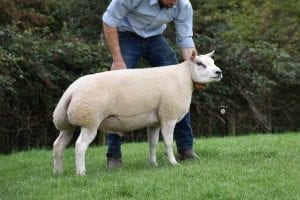